The next Author of Honor sadly passed away 14 years ago on the date I am typing this — November 9. I had already planned to sit down and begin writing about this novelist before discovering that today marked this occasion. Strange coincidence? He died at the age of 50, before witnessing the significant imprint he would leave on the literary world. A somber note to start on, I admit, so let’s turn the mood around. This author penned an awesome crime fiction trilogy with a central female character that is fearless and, quite frankly, kicks ass! Have you guessed who it is?

It is the man behind the Millennium Trilogy: “The Girl with the Dragon Tattoo,” “The Girl Who Played with Fire” and “The Girl Who Kicked the Hornet’s Nest.” Born August 15, 1954 in Umeå, Sweden, Stieg Larsson was primarily raised by his grandparents. His grandfather strongly opposed right-wing extremism and was even imprisoned for a period in a work camp during World War II due to his anti-Nazi sentiments. He had a profound influence on Larsson’s political activism and career as a journalist. As Stieg entered adulthood, he became involved in the left-wing movement and was passionate about equal rights and freedom of speech.

He closely researched and tracked far-right extremists and in 1995, played a key role in establishing the anti-fascist Swedish magazine “Expo.” There’s no question that the journalist was outspoken about his political views and because of this, he and his life partner Eva Gabrielsson lived under constant threat of right-wing terrorism. So, given his background, the plot of the Millennium Series is very fitting. Those who have read the books can probably see the parallels between the author and the character Mikael Blomkvist, who is also an outspoken, left-wing journalist.

The way I discovered the trilogy is a bit backwards. Whenever there are film adaptations of a book, I prefer to read the story first. Well, that didn’t happen in this case. I came across the Swedish movie series while browsing the shelves of a video store. Suddenly, staring back at me was a hooded girl garbed head-to-toe in black with piercings wearing a spiked collar and dark lipstick sitting on the floor in front of a fireplace. It was the first installment, “The Girl with the Dragon Tattoo,” starring Noomi Rapace as the heroine Lisbeth Salander. I had to see the movie, so I rented it, and my husband and I watched it that night and were immediately hooked. We went back and checked out the rest of the film series and I could not get the story out of my head.

I received the first book in the trilogy that year as a Christmas gift from a co-worker. I voraciously read parts one through three and I have to say that even though I saw the film versions first, the books were not ruined at all for me. In many ways, it was like reading the story for the first time. I was enthralled by Lisbeth. She’s a vigilante who, in many ways, is like a superhero, but without supernatural powers. Although, considering the perils she endures, it’s hard to believe she’s human!

Lisbeth Salander is one of my favorite book characters because of how I can relate to her. She’s an introvert, not social, dark and above all, disdains men who hate women. I think she appeals to so many readers because we can find something we have in common with her. Haven’t we all felt like outsiders, like we didn’t belong? Haven’t we felt marginalized because of how we choose to dress, our interests, how we look, how we think, how we talk or where we are from? Salander is like the patron saint of the pariahs of society. Excuse me if I’m getting a bit poetic, but that’s the effect she has on me.

The Millennium Series was planned to span 10 books, but the author’s life was cut short when he died of a heart attack as he was climbing the stairs to work. It’s been said he didn’t lead the healthiest of lifestyles, which most likely contributed to his premature death. The works he did complete were published posthumously and were an immediate success.

He spent 32 years with his partner, Eva Gabrielsson, who helped him considerably as he was writing his novels. When he passed, controversy sparked between Gabrielsson and Stieg’s father and brother who held they had authority over his estate. Since Eva and Stieg never legally married and the writer left no will, unfortunately the courts did not rule in her favor. For more of her story, I suggest reading “‘There Are Things I Want You to Know’ About Stieg Larsson and Me,” where Eva Gabrielsson shares details about their life together and her ongoing battle to gain literary rights over his work. She states that Stieg wrote 200 pages of the fourth novel, but she refuses to relinquish these into the hands of his father and brother. 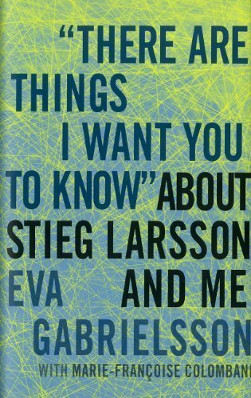 “The Girl in the Spider’s Web”

We may never see what Stieg Larsson managed to produce for the fourth installment, but permission was granted for Swedish journalist and author David Lagercrantz to continue the series. Two books have been published so far — “The Girl in the Spider’s Web” and “The Girl Who Takes an Eye for an Eye.” I was quite torn about reading these because of the controversy surrounding the continuation of the series, but my husband had bought me book #4, so I buckled and read it. Of course there are variations because a different author is putting his influence on another novelist’s work, but I enjoyed it. The film adaptation just released in theaters. I have yet to read the fifth book in the series, but I do plan to check it out.

Although he was not able to see his entire Millennium Series to fruition, Stieg Larsson left us with a fierce and intelligent female character that is a force to be reckoned with. He delivered a story that shows us how important it is to fight for the greater good and battle injustice. In this way, his beliefs, voice and words will be immortalized.

Learn more about the author and the Millennium Series at the official website.

And please leave any comments or thoughts about this week’s Author of Honor!