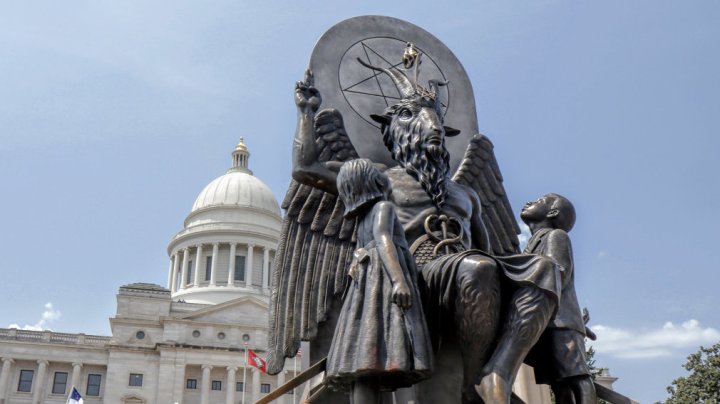 It may seem blasphemous to some to release a documentary titled “Hail Satan?” a few days before Easter Sunday. Or, maybe it was perfectly timed? It’s also easy to jump to conclusions about what message such a film could possibly deliver. I’d assume that just mentioning the title to people would cause two opposite reactions—one of revulsion and the other of fascination. When it comes to the topics of Satan and Satanism, is there a middle ground between the two responses?

Satanism is no doubt a controversial subject and when I decided that I had to write about the documentary, I did think of the implications. I know there is the possibility that some individuals may be offended and off put by what I’m going to share here because not only will this be a review of the film, but also a window into my personal beliefs and opinions. I’m not searching for anyone to agree with me. I want this piece to create a dialogue between all of us, a dialogue where we can share our viewpoints in a non-judgmental and respectful environment.

I first became aware of the film project after following its Instagram account. I was immediately interested in what the documentary would discuss. I am no stranger to Satanism and have done my own exploring of it, but more on that later.

Directed by Penny Lane, the woman behind “Our Nixon,” “Hail Satan?” explores The Satanic Temple (TST), an organization co-founded in 2013 by Lucien Greaves. The documentary follows Greaves and fellow TST members as they push for religious freedom and equality in the United States through politically and socially-charged campaigns. The form of Satanism this establishment practices is a far cry from the stereotypical representations propagated by the media and Christianity.

The Temple is not at all similar or connected to Anton Szandor LaVey’s Church of Satan or the Temple of Satan. A couple of defining differences between TST and these two religions is that there is no practice of magick or promotion of supernatural beliefs. Like the Church of Satan though, The Satanic Temple does not believe in a physical Satan that reigns in hell. In fact, one of its tenets states, “Beliefs should conform to one’s best scientific understanding of the world. One should take care never to distort scientific facts to fit one’s beliefs.”

Instead, TST gives a voice to the under-represented. They have held public displays calling for female reproductive rights, an end to child student abuse in the public-school system and equal representation of religions.

One part of the documentary I found amusing was when TST challenges Arkansas Legislature after it passed a bill to erect a statuette displaying the Ten Commandments on State Capitol grounds. The Satanic Temple felt this action should only be permissible if other religious monuments, other than those belonging to Christianity, could be exhibited. So, TST proposed that its Baphomet statue be put up next to the Ten Commandments to show acceptance of all belief systems. According to the Temple’s website, there is a lawsuit pending between the Temple and Arkansas administration because the legislature is attempting to use means that go against the Constitution to prevent the Baphomet statue from being erected.

The documentary also shows that The Satanic Temple maintains a sense of humor and patience as it goes about its business. Members endure much ridicule, harassment and threats from zealots and the narrow-minded population. They handle persecution with a smile, not violence.

Before watching this documentary, I wasn’t entirely familiar with The Satanic Temple. My initial dabbling with Satanism was during my teens when I read Anton Szandor LaVey’s “The Satanic Bible.” Being at a young and impressionable age, I was intrigued by the book and its teachings. It appeared mysterious and opposed the religious beliefs I had been brought up to obey, which, when you’re a rebellious teenager, seems cool.

I was baptized and raised Catholic, but as I grew older, I began to question the Church. My budding interest in other spiritual practices, from Wicca to Hinduism, left me feeling that there was so much more than what Christian doctrine offered. I don’t affiliate with any religion. I consider myself more spiritual than religious, although that may seem like a cop-out to some. But, to avoid going on a tangent about religion in general, I want to discuss how “Hail Satan?” addresses the oversaturation of Christianity in America.

One of the questions The Satanic Temple wants the nation to confront is how secular of a country is the United States. There’s supposed to be a separation of Church and State, but how firmly does that line stand? Somehow over time, religion and politics continue to cavort. The Pledge of Allegiance declares “one nation under God.” The War on Terrorism has become a battle between Christians and Muslims, creating panic in America towards other religious beliefs. I see billboards advertising that the only way to salvation is through the bible.

For me, I think one of the significant messages of this documentary is that there needs to be a more balanced representation of religions throughout the U.S. The Satanic Temple’s purpose is not to diminish or destroy Christianity; it just wants to be viewed as equal, not less than or profane. Jesus and Buddha should be able to stand side by side, without controversy. Ultimately, all people should follow a faith of their own free will and should not have to endure another religion’s teachings being shoved down their throats.

After watching “Hail Satan?,” my husband asked me if I would ever consider myself a Satanist or become a member of The Satanic Temple. In all honesty, my answer is no. I appreciate the organization’s mission and support many of their tenets. You may even catch me proclaiming “Hail Satan!” but I prefer to not commit myself to any one religion at this time in my life. It doesn’t feel natural for me to declare an affiliation to any particular faith, but I am respectful of all beliefs given that they don’t promote harm to any living being. Will I feel the same in a few years? Maybe not. Maybe I’ll become a Satanist or return to my religious roots and become a devout Catholic. I have no idea what the future holds, but I do feel that our religious beliefs should not create division and hostility but should bring about open-mindedness and unity.

I should mention that during the writing of this post, The Satanic Temple announced that it has been recognized by the United States Federal Government as a church, a first for any Satanic organization!

The Satanic Temple has headquarters in Salem, Massachusetts, and currently has many chapters operating not only throughout America, but internationally as well. If you’d like to learn more, visit the official website.

“Hail Satan?” is now available to stream and to purchase on DVD. Learn more by visiting the documentary’s official website.

As always, I’d love to hear your thoughts and feedback. This post is a bit of a departure from what I normally cover here, but I think it’s important to talk about topics like this that make us think about the world we live in, and I hope to occasionally sprinkle a few of these types of pieces here and there.

2 thoughts on “Hail Satan?: An Enlightening Look Into Modern Satanism”