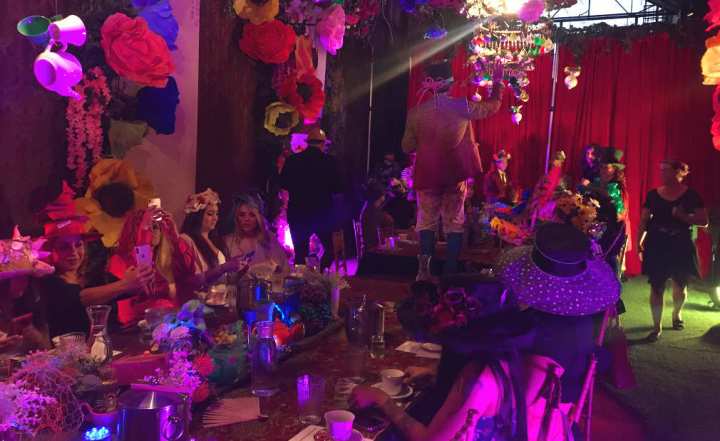 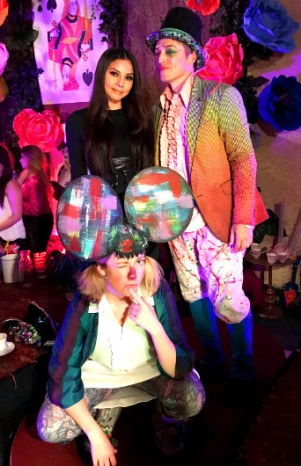 Photo with the Mad Hatter and Dormouse 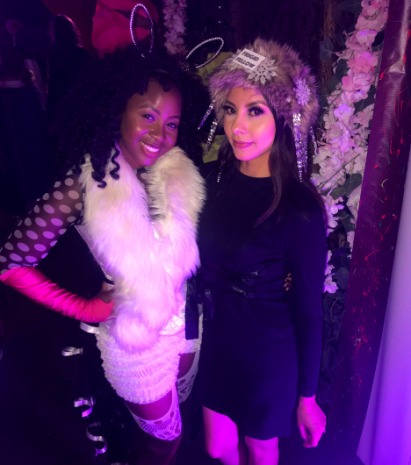 Photo with the March Hare

Are you ready to take a trip down the rabbit hole? If the answer is yes, then you’re in for a charming time that promises to become “curiouser and curiouser” as it progresses. Produced by Fever Labs, Inc., the Mad Hatter Gin & Tea Party is an immersive experience taking place in Hollywood, California. The event is 90-minutes of entertainment featuring delicious cocktails, naughty humor and, of course, characters the Mad Hatter, Dormouse and March Hare.

The show is inspired by Lewis Carroll’s “Alice’s Adventures in Wonderland” and “Through the Looking-Glass.” I have read and love both books, and enjoyed the Disney animated film as well as Tim Burton’s remakes of the classic tales. Anticipation filled me as I waited to enter what lie beyond the door. 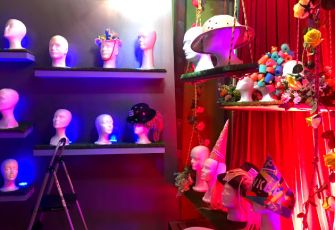 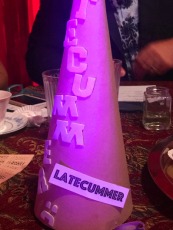 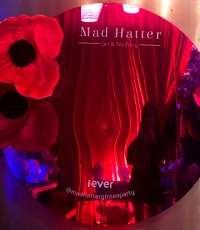 Guests in attendance were first led into a foyer and given a Drink Me welcome beverage that had absinthe. The room contained all sorts of colorful hats! No two looked the same, and each were named and decorated according to its name. I encountered a bit of trouble getting a couple to remain on my head, but finally got one that was labeled “Frigid Fellow” to stay put. It was a faux fur cap with snowflakes and icicles. My husband’s head piece was titled “Bollocks Bowler.” If you’re familiar with British slang, then you may know “bollocks” means “nonsense” and is also used as an expletive. All the more funny, it is originally a Middle English term translating to “testicles.” Now do you get what I mean about naughty humor? 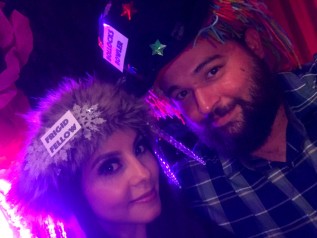 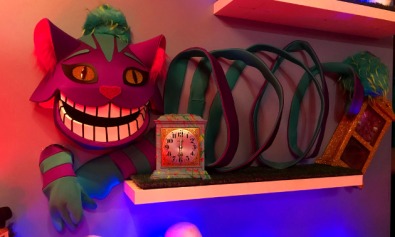 The Cheshire Cat of the Mad Hatter Gin & Tea Party

After a mechanical Cheshire Cat gave some insight on what to expect during the festivities, we were allowed into the main room. There were brilliant pops of color and décor befitting a Wonderland gathering. Chandeliers dripped with teacups and tea pots, flowers hung from the ceiling and sizable poker cards adorned the walls. Then, our gracious hosts emerged—Mad Hatter, Dormouse and March Hare.

Since it is Mad Hatter’s party, what he says goes, so everyone must do ordinary things in an unusual way. For instance, if someone had to go to the bathroom, she had to raise her hand and announce, “I need to visit my solicitor!” Then attendees would do a drum roll on the table as the person headed to the restroom, ahem, I mean solicitor.

The intimate gathering is not a show where attendees just sit and watch; all individuals are part of the live action. The characters engaged with everybody, invited people to join them in activities and encouraged participation in what unfolded before our eyes. Seating arrangements also allowed guests to mingle with each other. As an ice breaker, we were divided into smaller groups to play the “Never Have I Ever” game.

The cocktail menu consisted of four drinks, the first which I’ve already mentioned. The other three included Butterfly Pea Flower Tea, Mint Tea and Chai Tea. To accompany the beverages, small bites were served. I even tried a miniature-sized fried cricket!

Of all the hilarious activity that happened, one was especially comical. At the start of our evening, we were informed that another event was taking place in the same space—a male strip show. Although that room was separate from the one we were occupying, we would be sharing bathrooms with those guests and might even catch a peek of the racy performances happening on that side while on our way to the “solicitor.”

Well, at one point, we heard Ginuwine’s “Pony” blaring from the strip show’s speakers. (If you’re unfamiliar with the song, just look up Channing Tatum’s performance in “Magic Mike.”) It could not be ignored. The Mad Hatter was standing atop his platform in the center of the room, so we all began chanting in unison, “Take it off!” I do believe we made the Hatter blush. He was a good sport and removed his coat and hat for us. See what shenanigans gin and tea can lead to?

I had a memorable time, and would love to return with friends that have yet to check out this merrymaking experience and because it’s apparent no two visits will be exactly the same.

A few informative pointers if you plan to attend. Since the menu consists of cocktails, the event is for patrons ages 21 and over only. It takes place Tuesdays through Sundays at varying times and tickets are $60 per person (this includes the cocktails and snacks). It is requested you arrive 15 minutes prior to your entry time. The dress code is casual, but costumes are welcomed. Since it is easy to get lost in Los Angeles, you know you arrived at your destination when you see a wall with a huge image of the Mad Hatter’s green hat on it. There is a parking structure located directly across the street.

For those in the UK, the event also happens in London! Find out more by paying a visit to the Mad Hatter Gin & Tea Party official website.

Tell me what you think of this experience in the comments below!