Options for wining and dining in Los Angeles are abundant, but what if you like your main entrée served with a side of horror and a dash of devilish spice? From frightful feasts and witchy lounges to haunted bars, there are plenty of spots that will satisfy cravings for ghoulish delights. To aid you on your quest, I’ve rounded up a list of some of the best macabre dining experiences in Los Angeles. Bon(e) Appetit!

The brainchild of entrepreneur Zach Neil, this Tim Burton and Halloween-inspired restaurant and lounge first opened in New York City. In 2017, the bar made its way to the West Coast dazzling guests with spooky art and décor from films such as “The Nightmare Before Christmas” and “Beetlejuice,” and a freak show. Imbibe in menu items like Edward Burger Hands and the This is Halloween cocktail. Don’t be surprised if you have a surprise encounter with the Joker, Mr. Scissorhands and other bizarre characters. Curious to know more? Check out my blog posts covering the original pop-up location, plus the new, revamped spot. 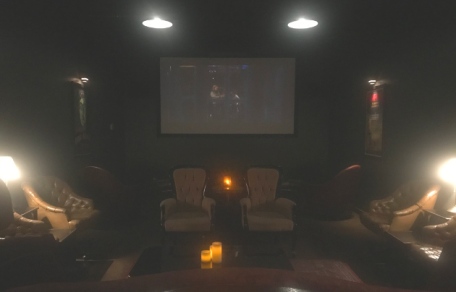 Pair your craft beer with a horror flick at Phantom Carriage. Enjoy a dimly lit ambiance decorated with cobwebs, coffins and barrels upon barrels of finely blended brews. Offerings include sandwitches, the Baphomet Harvest salad, London After Midnight ESB and Sid Pumpkin Beer, to name just a few. For a frightfully entertaining time, check out the brewery’s Wednesday Night Thrillers where movies such as “House on Haunted Hill,” “Poltergeist,” and “Bride of Frankenstein” have been screened. Other events hosted here are Horror Trivia and Making Monsters Drink-n-Paint Night.

It’s all about savory pizza, thirst-quenching beer and the apocalypse here! This Long Beach spot has only been open a little over a year and has quickly become the hangout for spooky kids. And by kids, I really mean adults because the pizzeria is for crowds ages 21 and over. The eatery serves up pizzas like the Angel of Death, plus features an arcade, original dark art and a movie projector showing horror classics.

Speaking of art, an exciting addition is coming to the restaurant. The Dark Art Emporium, which is associated with The 4th Horseman, will be setting up shop in the same building! That means guests will have the chance to eat, drink and take in some fine, deviant paintings. For more details, read my feature here.

Let’s continue with hellish themes as I introduce The Drunken Devil. There is no permanent brick and mortar for this establishment because it’s actually a production company that holds gatherings at different venues. The brand creates immersive dining experiences with morbid themes, such as Bloody Brunch and the popular “To Live and Di(n)e in LA” where patrons are served a full-course menu and cocktails while in the presence of infamous serial killers and victims. Expect gore, guts, monsters, sultry burlesque acts and other sinful delights that are not for the faint of heart.

If witches, wands and spellcasting are your thing, then a visit to The Cauldron is a must, although, you won’t find Harry Potter references here. Instead, the vibe evokes an atmosphere that fuses together 17th-century Salem and “Hocus Pocus.” There’s even a private room referred to as the ‘haunted library’ hidden behind floor-to-ceiling bookshelves. Imbibe in a variety of small bites and enchanting spirits, including my favorite, The Grey Witch. Hungry for more details and a peek inside? Have a look at my full review here.

Abracadabra! The Black Rabbit Rose is another magical spot where not all is as it seems. The lounge offers a menu featuring Thai Chinese cuisine and cocktails made to play tricks on the beholder. During my first visit here, a round of martinis was ordered. The server came to my party’s table with an empty tray. As he talked to us, he covered the tray, then upon lifting the lid, an assembly of drinks appeared. The theatre hosts magicians, illusionists and The Scarlet Hour, a sultry burlesque show presented by TEASE, If You Please!

Situated on the Sunset Strip, this iconic hotel and restaurant is not so much known for its food and drinks, as it is for its grim and racy past. The historic establishment has seen the likes of Old Hollywood stars, such as Lucille Ball, James Dean and Natalie Wood. In 1958, Bette Davis nearly set the entire place ablaze when she fell asleep holding a lit cigarette. Sharon Tate and Roman Polanski made the Chateau their home after being wed. They moved out when Tate became pregnant, just six months before the brutal Manson murders that would claim the lives of the actress and her unborn child. Tragedy has also occurred on the grounds of the castle when, in 1982, comedian John Belushi was found dead in his suite from a drug overdose.

Indeed, pieces of the Chateau’s past are troubling, but don’t let the gruesome incidents keep you away from enjoying an evening here. I’ve no doubt the spirits (the not-drinkable kind) would want joviality filling the air.

Breakfast, lunch and dinner are served, and the bar concocts one of the best tasting extra dry gin martinis. I only order this drink from places that know how to craft a high-quality classic cocktail.

And, in case the joint is still not macabre enough for you, it’s known to be a favorite haunt of Marilyn Manson’s.

It doesn’t get any spookier than a historic, haunted ship. The Queen Mary is a hub of paranormal activity and many professional ghost hunters have visited the vessel. Not only have people died on the liner, but it also garnered the moniker “The Gray Ghost” during World War II when it was used as a troopship. To this day, there are ghost sightings by both guests and employees. So, it should come as no surprise that to feast aboard The Queen Mary is a bucket list macabre dining experience!

I absolutely love the Observation Bar, which during its heyday, served as the First-Class Lounge for the traveling elite. It retains a 1930s Art Deco style and hearkens back to a time when dressing to the nines for cocktail hour was the norm.

Mixologists craft signature drinks that include Pimm’s Cup, Old Fashioned and Queen Mary Manhattan. My poison of choice here is also an extra dry gin martini because I can trust it will be made to perfection. Small bites are served as well, plus every Saturday night, there’s live entertainment playing jazz and other classic tunes. What better way to spend an evening than dancing with ghosts?

For fine dining, check out Sir Winston’s Restaurant & Lodge, which hosts Dining with the Spirits. This one-of-a-kind attraction provides a three-course meal paired with a ghost hunt and haunted history tour. Tickets are $134 per person.

For more paranormal experiences aboard the ship, get a peek at Aiden Sinclair’s Illusions of the Passed.

This is a small taste of macabre dining experiences in Los Angeles and no doubt new places will continue to pop up. There may even be some that have gone under my radar.

If anyone knows of more spooky dining spots, whether in LA or beyond, please do share!