Midnight Syndicate has been haunting the Gothic music landscape for more than 20 years. Members Edward Douglas and Gavin Goszka specialize in creating macabre melodies and their collection of work has become the ultimate Halloween soundtrack. With the fall season approaching, I thought it’d be fitting to present a look inside the machinations of the duo, along with a special interview.

I still recall the first Midnight Syndicate CD I bought at Hot Topic nearly 20 years ago. It was Vampyre: Symphonies from the Crypt and on the cover was a nocturnal creature emerging from a misty cemetery, peering out into the darkness. When I listened to it for the first time, I was completely captivated. With tracks such as “Blackest Rose,” “Ravages of Time” and “Unseen Eyes,” the album evoked longing and dark romance.

Although Midnight Syndicate’s music has been frequently used in haunted attractions across the globe, it’s not overridden with typical spooky sound effects. Orchestration is carefully crafted to conjure up a particular atmosphere. You’ll hear strings, piano, ghostly echoes, pulsating hearts and other mystical sounds. Through their compositions, Douglas and Goszka have invited listeners into worlds featuring twisted carnivals, cursed Victorian homes, phantom-plagued graveyards and ruined castles. 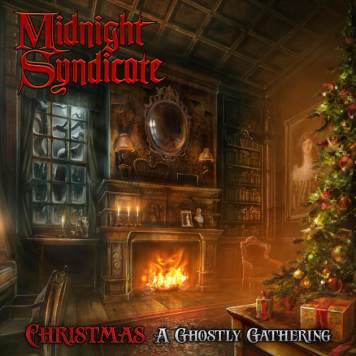 Douglas formed Midnight Syndicate during the late 1990s, shortly after directing and composing the score to his first horror film The Dead Matter. It was the movie’s chilling soundtrack, as well as influences from musicians such as Danny Elfman and Black Sabbath, that would inspire the creative direction of the group. Douglas joined forces with Goszka early on and the two have produced more than a dozen albums, receiving much critical acclaim throughout the years.

In 2010, Douglas once again assumed the role of director with the remake of The Dead Matter, collaborating with creatives such as Robert Kurtzman who’s known for his SFX makeup work on horror flicks including From Dusk Till Dawn, Wishmaster and, more recently, Doctor Sleep. Douglas and Goszka delivered a special soundtrack for the film titled The Dead Matter: Cemetery Gates. 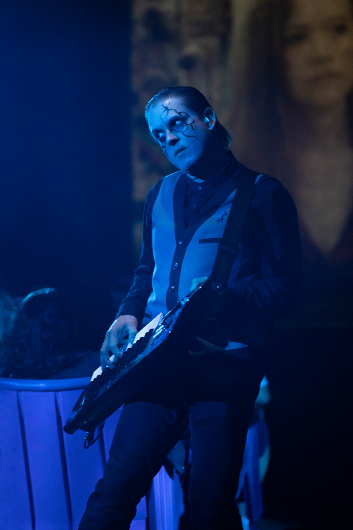 To the delight of many fans, Midnight Syndicate put on their first live performance in 2014 at Cedar Point’s HalloWeekends in Sandusky, Ohio. The duo took their creativity to the next level presenting a grand-scale horror production that blended theatre, music and film. It was such a success that they returned to do more shows for the Halloween event in the proceeding years.

There’s no doubt that Douglas and Goszka are masterminds when it comes to the art of horror, spinning webs of morbid tales and tunes. I had the pleasure of interviewing these two gentlemen to get a closer look inside their macabre world. Enjoy!

Q: So, Midnight Syndicate has been in existence for more than 20 years. You both have created an abundance of music. How do you feel your overall aesthetic has evolved since then?

Gavin: I think that improved technology has definitely allowed us to do more, not only with respect to our writing and arranging, but also from a sound design, mixing, and production standpoint. It’s hard to imagine being able to record an album like Carnival Arcane, for example, 20 years ago, when capturing and mixing 20 or 30 different instrument and sound effects tracks per song would have been prohibitively expensive.

Beyond that, I think our songwriting has evolved in a distinctly non-linear fashion, where it’s been more about improving how effectively we’re able to serve the needs of a particular story or theme than about making sure the current album is objectively better than its predecessor. I’ve always liked that approach, as it doesn’t force comparisons between albums or diminish the value of earlier works. Someone may like the story behind The 13th Hour more than that of Gates of Delirium, but that doesn’t mean that the former is somehow inherently “better” than the latter, simply because it’s newer. I look at each album as its own entity, with its own character, purpose, and value.

Edward: I agree with Gavin. I think that technology over the years has continually allowed us to better take the song in our heads and translate it on to an album. The older you get too, the more music you’ve listened to and the more experience you have doing what you do. That ends up having an effect on every aspect of production in some way. As Gavin said, I like to compare albums not as better or worse than one another, just different. One of the things I’m most pleased with is how we’ve been able to maintain a consistent aesthetic throughout the 20 years while still expanding it and going in different directions.

Q: One facet I appreciate about the music is that it tells a story. Your albums are themed, and each track takes the listener deeper into this imaginary world. Where does the inspiration come from when working on a new album idea?

Edward: Both of us draw lots of inspiration from darker music, movies, artwork, and literature, ranging from the classics to more modern fare. For me personally, a lot of my inspiration comes from Stephen King books, Tales from the Crypt comics, Dungeons & Dragons gaming sessions, and lots of classic horror films. Another big source is history. Over the years and to this day, I’m incredibly fascinated by the stories, times and characters of the past. Some of my favorite Midnight Syndicate albums are the ones where I was really able to dig into the history books to help detail the worlds we were creating. Visiting historical places in person can really spark the imagination as well.

Q: Past themes in your music have included vampires, zombies, classic horror monsters and ghosts. Are there other spectral creatures that you have yet to explore on an album that you’d like to?

Edward: The exciting part for me is that there are still so many worlds and places we have yet to explore with Midnight Syndicate. Those themes will involve creatures from both the spectral and corporeal realms. Gavin and I have a real fascination with the paranormal. It has been a constant source of inspiration for both of us our entire lives. As a result, that element plays a role in just about every Midnight Syndicate project we undertake in one way or another. I doubt that we have seen the last Midnight Syndicate album that focuses almost exclusively on spectral creatures like we did on The 13th Hour album.

Q: Shifting slightly from the topic of the music, I want to ask about the album cover art. For me, I know a Midnight Syndicate album by looking at the cover. The images are dark and foreboding. Do you select different artists to create them, and do you already have an idea of the image you want created?

Gavin: Although we may have a general idea of what we’d like to see for a particular cover, we also like to allow each artist to have the creative freedom to run with their ideas and incorporate their own unique style into the image. We’ve been fortunate enough to have worked with some incredibly talented artists over the years, from fantasy legend Keith Parkinson to Pascal Casolari, who created the stunningly detailed interior image for Christmas: A Ghostly Gathering.

Edward: The album cover art and song titles are a really important part of every Midnight Syndicate album. I think their importance is heightened by the fact that we’re creating instrumental “soundtracks to imaginary films.” The clues or hints we give on the cover and inside the packaging are the only suggestions the listener will receive to color their interpretation of a particular album.

Q: Some may not know, Edward, that you directed and scored your own film, The Dead Matter, which dealt with vampires and the occult. Is directing another film project something you’d like to do again and if so, what horror themes would you want to incorporate?

Edward: The original The Dead Matter movie I directed and scored back in 1995 was a critical part in the development of Midnight Syndicate. The sound design and scoring work I did for that film and others before it laid the foundation for the first several Midnight Syndicate albums. The 2010 remake of The Dead Matter, which was shot on Super 16 film with an actual budget, is celebrating its 10th anniversary this year. I can’t believe how time has flown!

Creating another film someday is something we would definitely consider. Film plays a critical role in the four Midnight Syndicate Live! shows we’ve produced so far. Working on those shows has gotten me back behind the camera again, which is nice. I’ve had the amazing opportunity to work with the incredibly talented Smoley brothers (Andrew and Martin) as well Dead Matter veterans like Mark Rakocy, David Greathouse, Beki Ingram, Gary Jones and Donna Williams. Continuing to operate in all of these different circles (music, live theater, film) keeps multiple options open to us as we move into the future.

Q: Since you two are synonymous with Halloween, I have to ask what are some of your favorite ways to celebrate the spooky season?

Gavin: Our live performances at Cedar Point’s HalloWeekends have typically overlapped with Halloween, so for myself, I haven’t been able to celebrate as much as I used to over the course of the past few years. That being said, I used to really enjoy decorating both the inside and outside of my house, and when I was younger, I would host an annual horror-themed Dungeons & Dragons game, where my entire basement would become part of the game environment. I also try to get out to visit local haunts whenever possible.

Edward: Much like Gavin, my Halloweens have been spent doing the Midnight Syndicate Live! shows the last several years. Before and even during those years, my Halloweens have been spent with my children, going trick-or-treating. I’m so happy to have been able to share and be a part of their Halloween traditions. When I’m able to, I take set pieces from The Dead Matter and decorate the outside of the house a bit. I also try and get out to as many haunted attractions as I can. Fall and winter are my favorite times of the year.

Q: Can you give any hints or teasers as to what Midnight Syndicate has planned next?

Edward: We are currently working on a new Midnight Syndicate album, which is very exciting for us. It feels great getting back into the writing mode and creating a new world for our listeners to explore. While COVID derailed our Midnight Syndicate Live! plans at Cedar Point in 2020, we hope to get back out there in 2021 as we have a really cool show we can’t wait to unleash. We also have a surprise coming this fall that we hope to be able to announce soon.

Until then, we encourage people to listen to and follow us on Spotify and YouTube. They can also stream us on iTunes and Amazon Music (ask Alexa to play Midnight Syndicate). We are really active and interactive on our Facebook page so that’s a great place to connect with us and stay up to date. We try to post exclusive content on our Instagram and Twitter accounts as well.

7 thoughts on “Spotlight on Midnight Syndicate: Masters of Gothic Melodies”