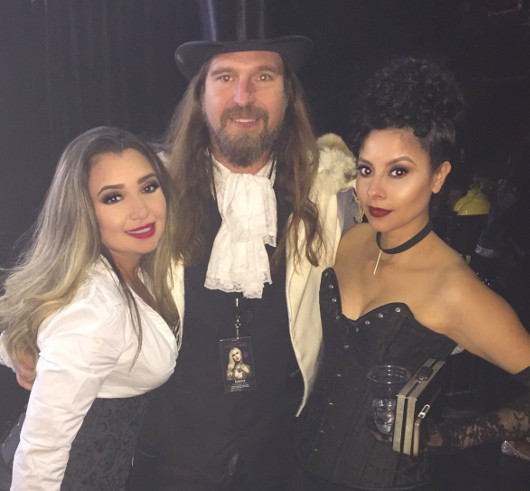 It was a dark and magical moonlit evening. I was dressed to the nines in a tightly laced-up black corset, black lace skirt, fishnet stockings and black boots. I felt like Cinderella in a gothic fairy tale headed to the Endless Night Vampire Ball, except this event wasn’t ceasing at midnight.

Father Sebastiaan, notorious fangsmith, is the mastermind behind the Endless Night Vampire Ball, which has been in existence since 1996. This fancy affair happens throughout the year and across the globe, from New Orleans to Venice, Italy. Being a vampire enthusiast, I was excited to attend this enchanted soiree for the first time.

The theme of this year’s Los Angeles ball was inspired by “The Lost Boys” film and took place at the Globe Theatre, a historic establishment that dates back to 1913. Walking through the doors, I left the streets of downtown LA behind and entered an entirely different world — the realm of the immortal.

At the center was the main stage bathed in a swirl of colorful lights. A medley of goth and industrial tunes resounded from the speakers, attendees were dressed in their vampiric best and libations poured freely. Father Sebastiaan and his Sabretooth Clan occupied one of the top balconies overlooking the festive scene. Jeffrey Damnit was the Master of Ceremonies and a very entertaining host who became more amusing with each glass of red wine he consumed throughout the evening.

There was so much to see and do, making a dull moment impossible. Belly dancing was performed by Bagoas and Mahafsoun; Angela Sommers put on a burlesque and fire show; and Ava Youssefi did live body painting. The CIRQUE, which is a focal point of the vampire balls, happened at the stroke of midnight with all in attendance howling in unison. A special treat was when Gerard McMahon sang “The Lost Boys” theme song “Cry Little Sister.”

Downstairs was occupied by Batcave who teamed up with Endless Night to create an underground party. This club is well known in the goth community and it was the perfect place to dance the hours away. Also on this level, in a dark corner, was a fetish display. Individuals were spanked on saddle seats and tied up with rope, bondage-style.

For my first vampire ball, I had an amazing time. It was wonderful to mingle with other dark souls. One of the highlights of the evening was my photo with Father Sebastiaan. It was an honor to get a picture with someone so creatively inspiring. There were secret rooms that I did not have the opportunity to seek out and vendors that I would have liked to check out. I’m not exaggerating when I said there was plenty to experience.

I don’t intend for this to be my last Endless Night event and am going to make this an annual tradition. Occasionally, special fetes are hosted at Bar Sinister. It was an entrancing evening I will not soon forget.

Interested in what I was wearing? Check out these sites: Dracula Clothing, Red Queen’s Black Legion and Ipso Facto.

I'm a writer and an avid reader. I was classically trained in voice years ago and once aspired to become an opera singer. I enjoy immersing myself in music, from classical to industrial tunes. I'm fascinated with vampires, all things spooky, vintage style and old Hollywood films. My website covers events, people, places and topics that embody all that is odd and macabre.